I didn't realise that there was negative news on the Northern Mockingbird in Exmouth this morning so when I had a mega alert on Birdguides saying "Northern Mockingbird, Pulborough, West Sussex" I thought someone had clicked the wrong button. Fast forward a few minutes and there it was a photo of the bird in a back garden in Pulborough. News was the bird had flown off down the River Arun, an hour or so later, Dave Sadler relocated the bird close to where it was found.

I was one of the first on site following in the footsteps of Dave Sadler, Brian Cox and Matt Phelps. Upon arrival the bird was perched in a small bush and showed really well for 10 minutes before it flew a short way down the river bank to a log pile. The bird then favoured this area for the rest of the time I was on site and showed really well to the ever-growing crowd.

Its remarkable that after departing Exmouth that this bird was found again so quickly and maybe even more unlikely that it turned up in Sussex of all places. An afternoon that will live long in the memory! 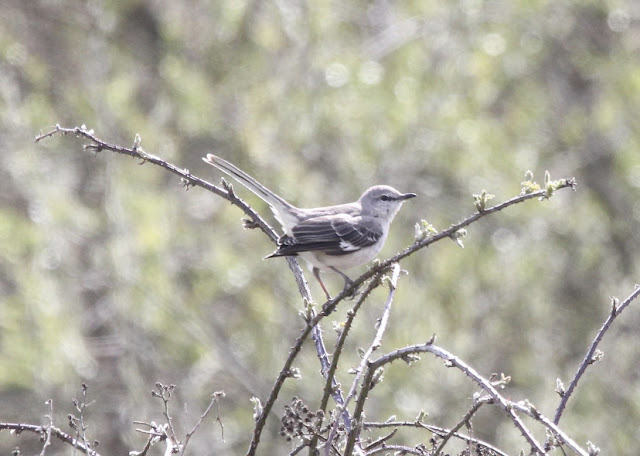 I left Goring at 20:45 and stopped briefly at Exeter services, I arrived in West Cornwall at 02:15 and spent the next 4 hours attempting to sleep in the car in the spacious car park at Drift Reservoir. In the morning I drove to McDonald’s in Penzance at opening time (06:00) for a drive thru breakfast and a much-needed coffee and then made my way to Newlyn Harbour for dawn where the Bookers were already watching the 2cy American Herring Gull sat on the water just a few feet away from the south pier. Over the next 45 minutes it was on view the whole time, on the water at first, then in flight and finally loafing on a pontoon with other gulls. This allowed me to check the salient points which distinguish it from our herring gull, such as the nearly all black tail which was now faded to brown, the rump, upper and undertail coverts all closely barred brown, the underparts not streaked but a uniform greyish brown and a two-toned glaucous gull like bill, being pale pink with a prominent black tip. A brute of a bird and well worth the long journey down to Cornwall.

I then went in search of an adult Glaucous Gull that had been seen at Gwithian several times recently but quickly aborted that idea with no sign of any gulls at all on the pools where it had been seen. Next stop was a tranquil Dozmary Pool, just a short detour off the A30 on Bodmin Moor, where there were four very active Ring-necked Ducks (2 drakes & 2 ducks), a smart drake Scaup, a female Goldeneye, three Swallows and a Sand Martin.

With news that the Northern Mockingbird was still at Exmouth, I made my way back into Devon to the now infamous alleyway between Iona Avenue and Cauleston Close where, armed with a stepladder, I had good but brief views over the fence of the bird in its favoured holly bush and then in the guttering of the house. Unfortunately, the houseowner was in the garden and, from the conversation I overheard taking place with other birders, he was less than happy with the situation so, having seen the bird, I quickly departed.

A brief stop at a blustery Blashford Lakes (where the car parks and hides were still closed) was rather underwhelming though I did log seven Goldeneye, four Goosanders (a drake & 3 redheads), 12 Black-tailed Godwits and two Black Swans. With the stepladder on the back seat, I tried Kingfisher Lake where, despite being able to see over the high fence, there was no sign of the Ferruginous Duck. By now tiredness was kicking in so I headed back to Goring, arriving at about 16:00 at the end of a long and tiring but very successful day.

Early morning a Willow Warbler was singing in the communal gardens. Later that morning, a White-tailed Eagle flew W over the flat at 11:27. I watched it for a couple of minutes before it gained in height and I lost it to view. My thanks to David Campbell who initially picked this bird up heading W over his garden in West Worthing a few minutes beforehand. After departing Goring-by-Sea airspace it was then tracked at two locations further west, these being East Preston and Rustington/N Littlehampton. Tim Mackrill later confirmed this to be an IoW bird, an amazing sight nevertheless, and certainly a species I never expected to see from our balcony/garden!

The Ruff (my first local record) was still present at Botolphs mid-afternoon along with 145 Lapwings in bitter conditions.

Drake Pochard still along with a pair of Teal.